The Boss Micro Br is a recording studio in you pocket. 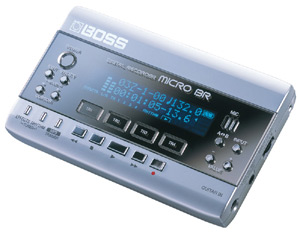 The unit is extremely compact and allows you to play back 4 tracks simultaneously. You can record up to 2 tracks simultaneously. Beyond that you have what is termed virtual tracks, each of the four tracks has 8 virtual tracks meaning a total of 32 tracks can be recorded. For example you can make multiple passes at adding a guitar solo. Record each attempt on a separate virtual track then choose the best when you are preparing the final mix. The MICROBR uses SD memory cards to record your music.

OK, so we have a really powerfull recording and mixing device but that is just the start. In addition to the recording this little box also provides nearly 300 rhythm tracks to use in your recordings, and they play on a seperate track so you don’t need to use one of the 4 playback channels to incorporate the rhythm track.

If thats not enough the unit can also slow down mp3 and wav recordings without changing the pitch, ideal for trying to figure out complicated licks and riffs.

It is really impressive how the BOSS MICROBR packs so much into such a small package.

The only negative comment I would make on the MICRO BR is that the number of features packed into the box and the limited space available for buttons and screen does make using the features quite difficult to learn. There is an extensive and well written manual which you can expect to spend some time working through. Once you have invested the time in getting to grips with the interface then you have an incredibly powerful and flexible recording and practice tool.

There is a trade off in that the portability does affect usability. If the portable aspect is not so important to you and you are thinking about a home recording setup then this may not be the thing for you.

For more info on the MICRO BR including a video demonstration visit Roland UK.

This entry was posted in Blues, Gadgets, Music. Bookmark the permalink.
We use cookies on our website to give you the most relevant experience by remembering your preferences and repeat visits. By clicking “Accept”, you consent to the use of ALL the cookies.
Do not sell my personal information.
Cookie SettingsAccept
Manage consent

This website uses cookies to improve your experience while you navigate through the website. Out of these, the cookies that are categorized as necessary are stored on your browser as they are essential for the working of basic functionalities of the website. We also use third-party cookies that help us analyze and understand how you use this website. These cookies will be stored in your browser only with your consent. You also have the option to opt-out of these cookies. But opting out of some of these cookies may affect your browsing experience.
Necessary Always Enabled
Necessary cookies are absolutely essential for the website to function properly. These cookies ensure basic functionalities and security features of the website, anonymously.
Functional
Functional cookies help to perform certain functionalities like sharing the content of the website on social media platforms, collect feedbacks, and other third-party features.
Performance
Performance cookies are used to understand and analyze the key performance indexes of the website which helps in delivering a better user experience for the visitors.
Analytics
Analytical cookies are used to understand how visitors interact with the website. These cookies help provide information on metrics the number of visitors, bounce rate, traffic source, etc.
Advertisement
Advertisement cookies are used to provide visitors with relevant ads and marketing campaigns. These cookies track visitors across websites and collect information to provide customized ads.
Others
Other uncategorized cookies are those that are being analyzed and have not been classified into a category as yet.
SAVE & ACCEPT
Powered by